In 1718, women in Pennsylvania were only able to own and manage property if their husbands were incapacitated. This remained true until 1839, when Mississippi was the first state to allow women to own property in their name. In 1878, women were allowed to attend university and obtain a degree. In 1844, women could retain their wages and finally had the right to a separate economy. In 1845, women were allowed to file patents. In 1848, women could sign their own contracts, which meant they would not be held accountable for their husbands debts. On August 18, 1920, women were given the right to vote. In 1923, a bill was passed that allowed women to be able to petition for divorce from their husbands. It was only acceptable for women to wear pants starting in the 1930s, though women strutted the streets in trousers during the 20s. In the 1960s, women began joining the workforce in large numbers. In 1980, the term sexual harassment was defined by the Equal Employment Opportunity Commission. In 1993, the Family and Medical Leave Act becomes law in the United States. On May 17, 2004, Massachusetts became the first state to recognize same-sex marriage.

Women have been fighting for the same rights as men since the beginning of time. Fighting, started out simply by standing up for herself, wanting to be a separate person from her husband, and being allowed to control the money she earned. Women then start to break out of the mold society had created for them. They wore clothing that was more functional. Next, women begin protesting. Many women risked being arrest so they could have their message heard. Women knew what was worth fighting for. As it gets closer to current day, women began obtaining the rights they risked so much trying to get.

In 2017, women are still in the fight. There are still protests and messages being shared. On January 21, 2017, demonstrators of the Women’s March protested for a women’s right to their body, healthcare reform, LGBTQ rights, workers’ rights, and equal pay, among a plethora of other things. Women are still fighting for basic rights.

Feminist is defined by Merriam-Webster Dictionary as “the theory of the political, economic, and social equality of the sexes.” Merriam-Webster Word of the Year for 2017 is feminism. Searches for the word have increase by 70% since last year. The Dictionary has decided feminism is the Word of the Year because it has continuous spiked throughout the year during important moments in national and worldwide news.

“When a single word is looked up in great volume, and also stands out as one associated with several different important stories, we can learn something about ourselves through the prism of vocabulary. There is an ongoing national conversation, and Merriam-Webster has a front-row seat,” wrote Merriam-Webster in their article announcing the Word of the Year for 2017.

With so much interest in the word feminism this year, it seems compelling to look into how the word has impacted people.

Many feminists of the past and of today, share many qualities. Along with being strong and taking action, many women were and are involved with needlework. While it seems to be one of the first profession of women, today it is an art platform.

In recent years, needlework has come back into popularity, similar to how records made a comeback in 2015. The most noticeable change of this reborn art form is the messages the needlework represents. Feminists express their feelings with thread on fabric and many have gained a large following on the Internet.

“It certainly brings people together,” said Jess De Wahls, who has been stitching for seven years. “I feel that particularly on Instagram, there is quite a wonderful community of stitchers around.”

Jess De Wahls, an artist who currently lives in London, is a self-taught embroidery, who used Youtube to show her the basics. She has dabbled in other forms of art, such as pin and jewelry making, and Retex-Sculptures, which De Wahls describes the process to TextileArtist.org as when she “anatomically layer[s] and sculpt[s] fabric ‘pockets’ stuffed with cushion filler onto a plywood backing in order to create a relief portrait.”

De Wahls’ style is unique and stands out in the embroidery community, mainly because her needlework almost always features a large set of ovaries. 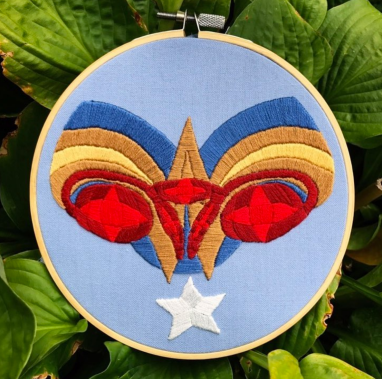 “Since I never went to any school for that, I guess my style is a concoction of my own style, and whoever inspired me along the way,” De Wahls said.

Inspiration can come from anywhere. Other artists, nature, history, life. Inspiration usually ends up creating the style of an artist.

“I’m really inspired by old tattoo flash sheets and nature and old typography,” said Jo Hauck from Surly Stitches Works, who credits her mother and aunts for her love and interest in needlework. Women handling down experience and inspiring the youth is how embroidery is still alive today. “If I didn’t have those women in my life I don’t think I would be embroidering today.” 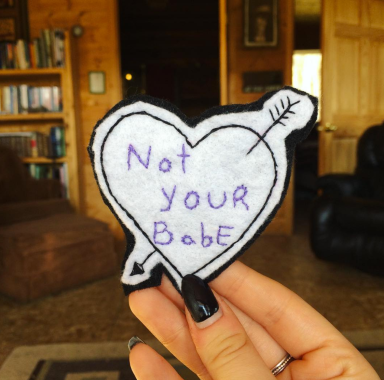 “It’s a female dominated art form that has been spreading feminist messages for centuries,” Hauck said. “It’s an inexpensive way for woman to make art and speak out about the injustices and inequalities that they experience in their life.”

Maria Green from Winebroidery understands the “uniquely feminist artistry.” Green started embroidering a year around and almost by chance. Thanks to her sister, who tagged her in a post of Facebook of “gorgeous embroidery piece,” she set out to the store and bought the necessary tools. Then, she just started.

Over the last year, Green’s style has evolved. Currently, she describes it as “bright and bold, sassy and feminist, and intricate work.” She has been through many styles trying to find the one that fits her best. Numerous of her embroideries focus on empowering women.

The first step to empowering women is creating a bond and join one another.

“The act of creating or picking something out for someone as a gift is really meaningful and brings the two people together and embroidery can do that,” Green said. “It’s also a space to literally write a message to share with someone, which can bring them together.”

“It gives them a safe space to share any message they want, and have this amazing community to welcome what they’re sharing,” Green said.

“There are some great Facebook groups that are so supportive and give advice,” said CaLee Henderson from Fiercely Created. “People are always interested in what I’m doing when I’m stitching in public.” 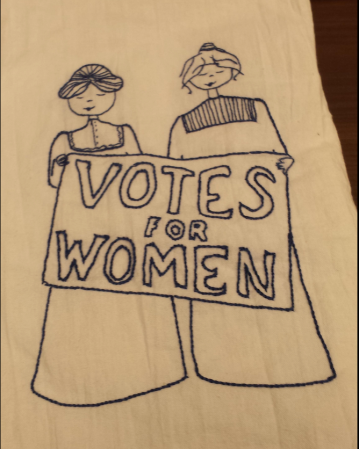 Henderson, who embroiders and crochets, enjoys needlework because it allows her to keep her hands busy. Though, she finds a supportive community in embroidery, she doesn’t believe it is an effective method for spreading messages.

“Anyone who would be interested in one of my feminist pieces is already a feminist,” said Henderson. This is why she doesn’t think it’s a good way to present an argument.

Some people like Cindy Good, mainly focus on their personal feelings when embroidering. It’s a message for herself.

“It’s allowed me to be creative and express myself freely,” said Good, who has been embroidering off and on since she was a child. “Needlework has always been a way for women, in particular to express themselves without judgement.”

Good believes feminism is personal, but sometimes she thinks the concentration is too restricted. “The focus at times has been too narrow and failed to help men and women realize, it’s not just hostile women who support the ideals of feminism.”

Many women agree that equality is important.

“The human race would be nowhere without women. Plain and simple,” Green said. “And by keeping them down, instead of elevating them as equals, we do the entire human race a disservice.”

“Women’s rights are human rights and we have a long way to go before we reach equality,” said Hauck.

“We live in a patriarchal society structure, so by default, if all genders were in fact equal, feminism would be redundant,” said De Wahls.

“It is so important to support feminism as a way to equality for everyone,” Henderson said. “All children should grow up believing that they are equal.”

Though all of these women, who are from all over of the world, that are different ages, and that are various parts of their lives, have been impacted by the word feminism. The word may have a specific definition but each woman has interpreted the definition their own way.

Needlework has given women a platform to express and share their feelings of feminism, equality, and empowerment.